And I’m not talking the conservative crazy “news” outlet, either.

This morning, as I was driving next to the Capitol grounds on my way home from the gym, a red fox crossed the street in front of me.  Random!

Unfortunately, I didn’t have my camera — but wish I could have taken a picture!

It was beautiful, and I’ve been obsessed all day with how I could see it again.  What is it doing on Capitol Hill?

Apparently, it’s been on the loose since the beginning of the month.

You can see that HERE.

Wish me luck in spotting it again!

Obviously, I took a hiatus from blogging.

A lot’s been going on.  The economy crashed in the U.S. and all over the world, major disasters occur with such normalness these days, that it’s kind of scary.  Cholera is back with a vengeance in Haiti.  Michael Jackson is dead.  Barack Obama’s approval has dropped.  Jon Stewart and Stephen Colbert’s DC rally topped both Glenn Beck’s and the NAACP’s in attendance.  Oprah is finishing up her show.  A real live tornado hit ground in Baltimore.

And my favorite story of the moment:  Prince William is officially engaged to Kate Middleton.

All my life, and I’m pretty sure I get this from my mom, I’ve been slightly obsessed with the royals.  My favorite book growing up was “The Little Princess”.  I remember being consumed with Princess Diana and her every move.  I remember the feeling of doom I had when John Kennedy Jr.’s plane went down and we lost him and Carolyn Bessett – the couple that came closest to U.S. Royalty for our generation.

But now it’s changing.  Prince William is getting married!

Don’t get me wrong, the economy still sucks.  Barack Obama’s presidency is till in troubled waters and the upcoming nuptials of two people I am pretty sure I will NEVER meet don’t make all that go away.  But a girl can dream, right? And that is what it’s all about, especially for us on this side of the Pond.

So, let’s start the wedding planning, everybody.

Rumor has it that our girl Kate has been venue shopping. 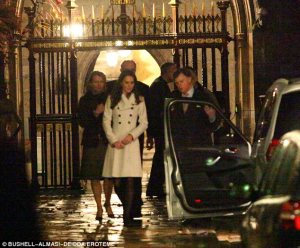 Will she pick Westminster Abbey?  Will she wear white?

So much to do!

I leave you with this, from my fave childhood book (which I’m pretty sure I read about 8 times):

“I am a princess. All girls are. Even if they live in tiny old attics. Even if they dress in rags, even if they aren’t pretty, or smart, or young. They’re still princesses. All of us.” – Frances Hodgson Burnett